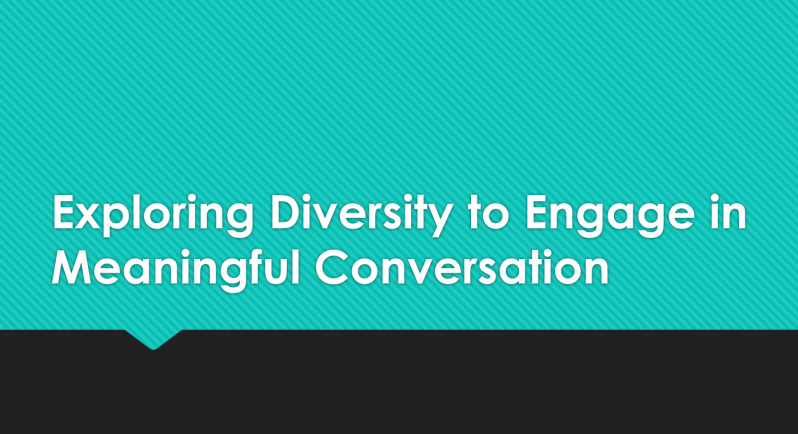 Diversity is more than a word; it’s a conversation. It requires definition, context, perspective. It has been applied to groups, to initiatives, to companies, to food, to ecosystems. Diversity can and does mean so many different things that in this day and social media age, it’s all but a prerequisite to unpack the term before you can ever begin talking about it.

I took a multi-culture and diversity course while completing my graduate degree. The first assignment consisted of completing a 2 sided diversity wheel that asked about you as a person and you as a construct. I know, I know, but stick with me. We were paired randomly with a partner and then asked to share as much as we felt comfortable sharing. At the end, we wrote brief introductions of our partner and shared it with the rest of the class.

I learned a few things about myself, things that I’ll likely discuss in another in-depth post. More importantly, I learned a great deal about the assumptions that are made when talking to other human beings. For example, by some accounts, our species is all we have in common. By others, looking alike is all it takes to be alike.

As a member of my company’s ERG program, I was finding it difficult to get real, deep, and frankly uncomfortable, conversation going. We were going in circles, talking about ‘us’ as women, as one homogeneous group that shares the same experiences. To some degree, that’s the truth. I’ve been cat-called, I’ve been judged for my gender, I’ve been challenged because of it. I also know, however, that my experience as a woman of color, as a person who is on a different education or career track, as someone who grew up in NYC, means that I don’t necessarily share the same perspective as the woman sitting next to me. This doesn’t make one of us better than the other but ignoring these differences can divide us.

Below is a workshop I delivered in a small group setting. I’ve expanded the initial exercise to open up conversations about what diversity and culture are, as well as to have participants identify their own knowledge gaps and look for ways to further explore them.